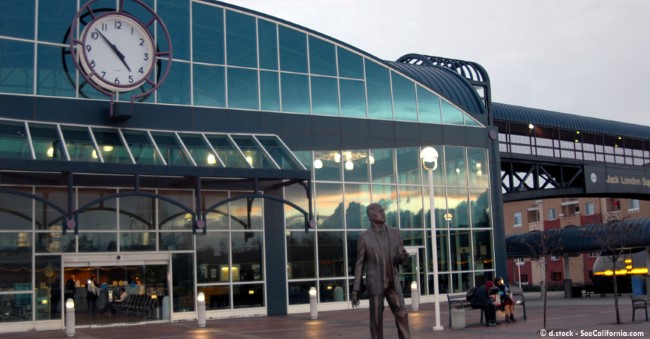 Oakland, California — You learn to love the San Francisco Bay Area, thanks to amenities such as water taxis, BART, and Amtrak Train, which stops at Jack London Square in Oakland.  C.W. Dellums Amtrak Station was opened in to replace the historic Central Station, structurally damaged by the Loma Prieta earthquake of

Routes severed at this station include: Coast Starlight, San Joaquin and Capitol Corridor.

The beautiful train station in Oakland with a big clock and sleek blue-green glass is owned by the Port of Oakland, and tracks are owned by the Union Pacific Railroad.  The architectural & design teams responsible for this elegant station were VBN Architects and /CH2M HILL design. In the overview of the project, considerations included an opportunity for the new railroad station to create a monument to railroad heritage. Specific to the selected site along the Embarcadero with proximity to the marinas, shops, restaurants and other businesses of Jack London Square, the location was  optimum to fulfilling the various goals.

Property owner, the Port of Oakland,  saw a unique opportunity to create an intercity transcontinental rail hub station for both the City of Oakland and Northern California. It was the operator of major shipping and aviation port facilities, and owner of the adjacent Jack London Square properties. The new station consolidated rail and bus passenger service.

For esthetics, the look & the feel were to reflect the sense of history and place that Jack London Square maintains with its Heinhold's Last Chance Saloon and the historic waterfront. History was not lost in the project, but artfully put into play through the vaulted, exposed interior truss work seen in 19th century northern Europe rail stations. Elements such as the cavernous interior of another Oakland station, the "Mole," and a pedestrian overpass designed with massive truss members reminiscent of 19th century railroad trestle bridges worked well for the overall look & feel of the project.

The train station, a  pedestrian overpass and tower structure providing access to the station from the parking lot on the other side of the tracks, and the platform canopy were the three major components of the project that all had to tie into one another.

To recapture the grandeur of train stations from the past, the new Oakland station was built with a double vaulted roof over a 5,sq.ft. atrium. During the day natural light brightens the interior, and the feeling of airiness is amplified by the high, delicate curves of the intersecting trusses. At night the sculptural character of the interior truss work can be seen through the glass exterior of the atrium.  The beauty of the project is the way historic elements such as 19th century style truss work contrasts, yet blends with the modern, gracefully curving, intersecting vault of cylindrical and elliptic forms.

The building is a steel frame structure that includes a system of wide flange beams and tube steel columns to support gravity loads in the office section. The roof truss is placed upon upon steel wide-flange columns to support gravity loads in the atrium. Eight load-bearing points around the periphery of the roof, with the load transferred at the four corners and two transverse trusses works well, and the structure is tied together for lateral load resistance.

An interesting challenge to the bridge construction was the requirement that the trains on the track below continue their normal operations, unimpeded by the project. The pre-installation work was performed at a warehouse two miles away and transported to the site for the assembly between 2 and 4 a.m. on Sunday mornings when no trains were scheduled.

Prefabrication of a foot-long span that was placed between two towers as a single unit worked like a charm, thanks to precise engineering.  The tower legs and cross members were initially set into place, waiting for the arrival of the connecting span. Oakland police escorted the huge transport bringing the connecting span from the warehouse to the location on a Sunday morning at 2 a.m. during a torrential rainstorms.

As the pieces fit precisely into place and the welders gave the nod, a crowd cheered and the bridge was unofficially christened in the middle of the night.

Of the 74 California stations served by Amtrak, Oakland was the tenth-busiest in FY, boarding or de-training an average of about 1, passengers daily.[7]