Gov. Jay Inslee celebrated Washington state’s reopening on Thursday in typical Seattle fashion: on the roof of the Space Needle under a cloudy morning sky.

Coming off a record-breaking heat wave, the wind and cooler weather were a welcome relief as Inslee and other officials took turns hoisting the bright yellow and green “Washington Ready” flag up the spire of the Space Needle. The flag raising is part of Inslee’s tour of the state.

“We’re reopening the state,” Inslee said. “We’re able to this because Washington has pulled together and we know when we pull together, we get through together.”

Only a few dozen people were allowed on top of the Space Needle, and Inslee left quickly after 8:30 a.m. Afterward, a five-person drum line performed below on the observation deck in view of downtown Seattle.

To raise awareness of the importance of face-coverings, the Seattle Space Needle did so in the best way they know how —and it's in the form of a "mask up" flag.

On Friday, July 10, King County Executive Dow Constantine was the one to raise the 20-foot-by-30-foot flag as a reminder to Washingtonians of all ages "mask up" and do their part.

As Washington continues to reopen, King County recognizes the role of all people and businesses have in keeping one another safe.

The state's case numbers have been slowly and steadily growing, so King County has made some adjustments to combat the rise.

Just lask week, Governor Inslee mandated face coverings in all businesses, granting owners the right to not serve anyone without a mask.

More and more businesses are jumping on an advertisement plan to help spread awareness of wearing masks.

If you were flying above or driving through downtown Seattle earlier this week, you may have spotted a familiar logo flying above one of the Pacific Northwest’s most iconic landmarks.

The Space Needle is not only one of our neighbors, but a symbol of Seattle. We couldn’t imagine a better place for us to honor our employees and recognize them for all their hard work during this challenging year. 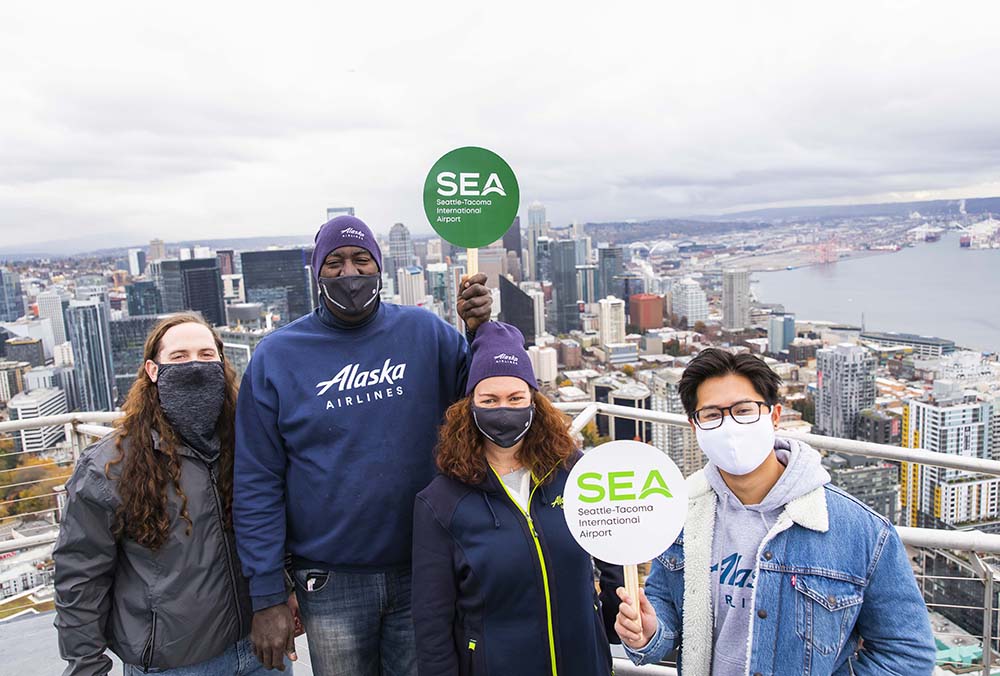 On Tuesday, our team helped raise our tail atop the Space Needle. Alaska Flight attendant Hampton Isom, who took part in the event said “Being able to participate in something like this with other employees is so gratifying. I never thought I would have an experience like this – it’s just fantastic.”

Alaska software engineer Denny Tran shared similar sentiment. “It’s definitely really cool – it’s a once in a lifetime experience. I am really glad I was able to do this,” Tran said. 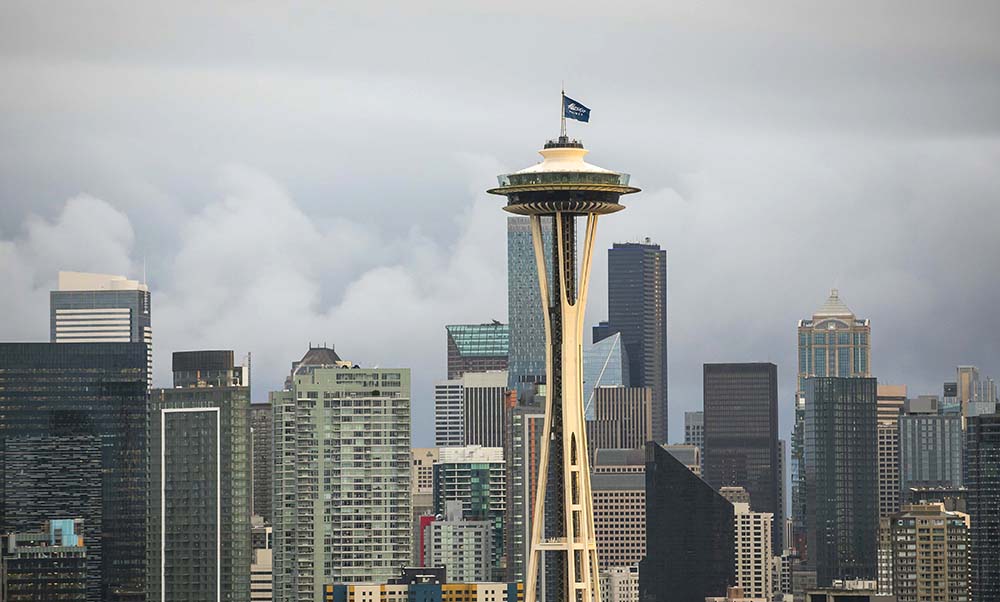 Not only was the flag raising meant to celebrate our employees, but we also hope it reminds our hometown guests, friends and family that we aren’t going anywhere.

“I hope guests see these images as a reinforcement of our commitment to Seattle,” said Alaska President Ben Minicucci who was also present for the flag raising. “We are proud to be a member of this community, and we want every single person in Seattle to know that Alaska is here for them when they’re ready to fly again.”

Raising the flag was just the kickoff to a new partnership between our two iconic Pacific Northwest companies. Over the next year, the Space Needle will offer our elites and credit card holders exclusive benefits and more. Stay tuned for more details as we roll out this exciting partnership!

From France’s flag to a pride flag and one supporting the Seahawks, it seemed as though Seattle’s Space Needle had seen it all.

That is, until this morning, when Mayor Jenny Durkan hoisted a blue #WeGotThisSeattle flag to the top.

The #COVID_19 crisis will be one of the most challenging and consequential events of our time – but we we are already seeing the best of Seattle: our neighbors stepping up to support their communities.

The motivational flag has lit a spark in the hearts of Seattleites, and here are a few of our favorite reactions:

Seeing this flag gave me so much hope this morning. Thank you. 💙 #wegotthisseattle

Today a beacon of hope flies above the Space Needle. #MoreThanJustAFlag

Nearly teared up when I looked out my office window today and saw the flag on the @space_needle#WeGotThisSeattlehttps://t.co/lH14o2MLL6

It’s hard to see but the Space Needle has a flag that says “We got this Seattle” and not gonna lie it made me cry a little. ❤️ pic.twitter.com/qFUIyv2utX

No one saw how I fucked a chick for the first time on the Kazantip beach. Boryan finished his cigarette and began stroking his penis. I realized that the neighbor should be lowered again. He took Vera off his penis and put it in front of Borka's feet.

Now we could be seen well.

From there a man appeared. As I understood the photographer. - Come in please. he said and made a gesture inviting me to go in.

Well, what is it, all the time without them, but without them. Let's try in panties now, huh. - Come on.