The Ford F-150 has been a best seller for decades. This 1990 XLT Lariat, a nice example of this classic ½-ton pick-up, was partially restored in 2015. The re-spray of two-tone Burgundy/White was professionally applied and is in very good condition. The exterior is accented with XLT insignias and both tailgate and bumpers are in excellent condition. Folding mirrors, a 2” receiver and a front air deflector complete the exterior package. The vinyl interior was restored in 2015. Seats, dash, door cards, headliner and carpeting are all in good condition and an expanded gauge package has been added. Our F-150 XLT is equipped with A/C, power steering and power disc/drum brakes. Convenience features include: AM/FM stereo, cruise, power locks and power tinted windows. The Ford is powered by a 5.0L small-block that was rebuilt in 2015. A K&N filter system was installed and it is backed by a 4-speed automatic transmission with a factory differential. A set of 15” factory 'rally-style' wheels with centers and trim rings mount nice Michelin radials. You will be proud to put this Lariat XLT in your driveway. ALL VEHICLES SOLD “AS IS”.

The eighth generation of the Ford F-Series is a line of pickup trucks and light- to medium-duty commercial trucks produced by Ford from 1986 to 1991. While the 1980 cab and chassis was carried over to the new model, the 1987 model was more streamlined, and maintenance items were made simpler. The exterior was facelifted with new composite headlamps, a more aerodynamic front end, and circular fenders. Inside, the interior was given a complete redesign. Rear antilock brakes were now standard, the first pickup truck to boast this. For the first time, all models were produced with straight-sided Styleside beds; the Flareside bed was discontinued except for a small number of early 1987 models using leftover 1986 beds with new circular fenders. In 1991 Ford premiered the 9th gen tail lights (the white reverse light was decreased in size) on the last year of the 8th generation. 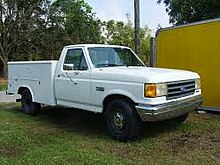 For 1991, a "Nite" trim package was introduced. It included all blacked-out exterior trim, either a pink or blue/purple stripe, and a "Nite" decal on the sides of the cargo box.

The new-for-1987 F-Super Duty was essentially a Class 4 truck built as a chassis cab, with an aftermarket bed (specific to its future use) added after the truck was built. The F-Super Duty came with dual fuel tanks with a dash-mounted toggle switch to switch between each tank, while using only a single fuel gauge. It came with a PTO used to power attachments, such as winches or a dump bed, directly from the transmission. F-Super Duty models were rated at about 14,500 lb (6,577 kg) GVWR and came with either the standard 7.5 L (460 CID) gas V8 or the optional 7.3 L (444 CID) diesel V8. All wheels were 10-lug with dual wheels in the rear. The transmission was a three-speed automatic, with the four-speed electronically controlled E4OD as an option beginning in 1990.[3] There was also a stripped chassis available, offering a 16,000 lb (7,257 kg) GVWR on two wheelbases of 158 or 178 in (4,013 or 4,521 mm) and the 7.3 L diesel engine as the sole option.[3] This model should not be confused with the later Super Duty commercial line of trucks starting with the 1999 model year.

While the dated 3-speed column-mounted manual transmission was discontinued, much of the rest of the transmission lineup carried over from the 1980-1986 trucks. In 1988, the five-speed ZF S5-42 replaced the Borg-Warner T19 in F-250 and F-350 models. For the F-150 and light-duty F-250, the heavier-duty Borg-Warner T18 4-speed manual remained available, while the Mazda-built M5OD 5-speed manual was added to the model lineup for 4.9 L inline-6 and 5.0 L V8-equipped models.

Four-wheel-drive improvements included the addition of automatic locking hubs for the F-150 in 1989. Models with the 5.0L V8 also had an option of a "Touch Drive" electronic transfer case.[citation needed]

From 1980 through 1996, Ford offered a four-wheel-drive swing arm independent front suspension called Twin Traction Beam (TTB). Based on its two-wheel-drive twin I-beam suspension from 1965, Ford mounted a Dana 44 or Dana 50 differential in the driver-side front axle beam and transmitted torque to the passenger-side wheel with a U-jointed axleshaft. TTB coil springs were still used on the F-150, while the four-wheel-drive F-250 and F-350 got leaf springs. The F-250 received TTB Dana 50 axles, and the F-350 a solid Dana 60 axle.

Ford’s F-series pickup has always been built with the goal of working hard. In 1990, Ford’s F150 had been the best-selling truck in America for 13 years running, and for 10 years it had been the best built American light truck. Those kinds of stats had owners flocking to dealer showrooms to get rigs for use in all kinds of difficult driving conditions. With those kinds of “rough ‘n ready” expectations, the haulers typically were bumped and bruised as part of their journey, but that’s not the case with this unrestored 1990 F150 XLT Lariat Supercab pickup.

It’s had just two owners and shows only 192 miles on the odometer. It even still wears its original tires. Being one of the upper trims, the Lariat brought items like a chrome grille, tinted glass, carpeting, sport wheel covers and a leather-wrapped steering wheel. It’s a striking setup, with the truck sporting two-tone gray paint paired to a gray interior. That’s not to say it didn’t come equipped to get down and dirty. Construction is body on frame with the model boasting a GVWR of 6,250 pound. Up front, the suspension had coil springs with two-stage leaf springs in the rear. Gas-pressurized shock absorbers were used at all four corners. The brakes used power front discs with rear drums and came with a computerized rear anti-lock system.

Under the hood is a 5.0L V-8 engine with electronic fuel injection, and in this example it is paired to an automatic transmission. To keep this rig ready for long haul adventures, dual fuel tanks were standard equipment. This truck is further equipped with power steering, brakes, windows, door locks and cruise control. The ultra-clean and standout vehicle includes documentation like a Deluxe Marti Report and a clean CarFax.

Are you her. Not too old for you. "- and already turning to the mother," Don't take my pills anymore. They cost money. Lyubovnichki !, Olga Sergeevna covered her face and ran out of the house.

Then a maid was hired to look after him and his sister. Jean immediately liked her. But all his attempts to court her, she turned into a joke. Once, when she put him and his sister to bed and left, he decided to sneak into her room and confess his love to her. After waiting for his sister to fall asleep, he left the room.

It turned my head briefly. But I quickly came to my senses. We studied Russian for about an hour and a half. The lesson was coming to an end.