Pakistani singer Rabi Pirzada filed a complaint with the Federal Investigation Agency (FIA) on Saturday to take action against the persons who leaked her private videos and pictures on social media.

Rabi approached the cybercrime wing of the FIA to deal with the matter after private videos and pictures of the singer were leaked and anonymously shared on social media and WhatsApp earlier this week.

The FIA confirmed that it had received Rabi Pirzada's complaint. The law enforcement agency said has started an investigation into the case and that it would write a letter to Facebook on Monday, urging the social media website to disclose the details of the person who leaked the private videos on the social media platform.

On Saturday, several users on social media came out in support of the singer.

Popular singer Meesha Shafi and her lawyer Nighat Dad were among those backing Rabi Pirzada.

Taking to Twitter, Meesha said that even though Rabi had accused her of doing a publicity stunt when she had come forth with her harassment accusations against Ali Zafar, she would always raise her voice when a victim is "shamed and humiliated".

"The same women who were accused of speaking up as a publicity stunt by Rabi are defending her unconditionally today. Including myself," Meesha said in her tweet.

"I highly condemn the leaking and sharing of these private videos and will always raise my voice when a victim is being shamed and humiliated," she tweeted.

Human rights activist and lawyer Nighat Dad, who represents Meesha in the defamation case against Ali Zafar, also condemned the leaking of the videos.

She said that, according to the Pakistan Electronic Crimes Act, forwarding "non-consensual intimate images and videos" to others is also a crime.

"Those who are weaponizing non-consensual intimate images and videos of @Rabipirzada and those who are forwarding them are committing crime under PECA," she explained, urging others to report the perpetrators to the authorities.

"Don't be a silent bystander, report these tweets and do not forward this violence," she tweeted.

Pakistani singer Rabi Pirzada after the private pictures controversy  came forth addressing the issue and stressing on her connection with religion in a video statement released on Thursday.

In the video statement, the first since an explicit video of her went viral on the internet a few weeks ago, Pirzada appeared clad in a solemn black dress and headscarf, and apologised to her fans.

Pirzada quoted religious texts extensively in her message, and informed those watching the video, released privately to the media across the nation, that she had found her true calling.

"My mistakes are between myself and my Creator, the One who knows what is in the hearts of the people. He is the All-Forgiving and the Most Merciful," she stressed.

Pirzada revealed that when her video was leaked, a lot of people started approaching her for films, television commercials, concerts and other private events, apparently in reaction to the negative content.

"A lot of women also offered to support and protect me, assuring me that no one would be able to raise a finger against me. These included those affiliated with #MeToo and #MeraJismMeriMarzi," she elaborated.

Pirzada detailed how people had ridiculed her after her video was leaked, accusing her of seeking cheap popularity and making lewd comments, "Some said it was a punishment for speaking against Modi, or PM Imran."

"But I realise that even after I run away from the world, I cannot run away from my Lord," she maintained. That is when I realised that whenever a woman is dragged into the public debate, so many things go wrong, she said.

Pirzada broke down into sobs more than once during the video.

"Harsh comments made by some of you may discourage many people from following the right path," she remarked. She added that those who were sharing the leaked material would be apprehended.

Pirzada shared she had also met people who had selflessly helped her, and they were like angels sent to help her. "I think I have been given a new life, and the meaning of my life is now only religion," she affirmed. 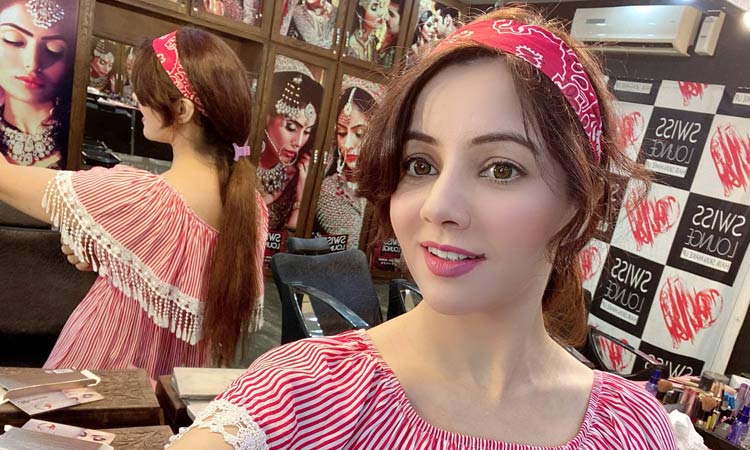 Personal photos and videos of Rabi Pirzada, the Pakistani actress who recently made headlines for threatening Indian Prime Minister Narendra Modi, have gone viral on social media, according to media reports. 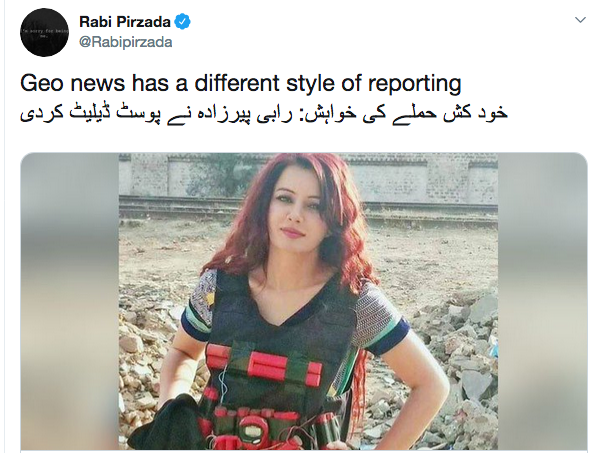 She came to the limelight after Neelum Munir, another actress, shared a clip of her dance number on her Instagram account for the movie "Kaaf-Kangna."

Munir said she performed the dance number only because it was supported by the Inter-Services Public Relations, the Pakistan Armed Forces' media wing.

To this, Pirzada reacted on Twitter saying: "Seriously disappointing, @OfficialDGISPR we all make mistakes but never refuse to admit it or explain it like this #chotisibaat." 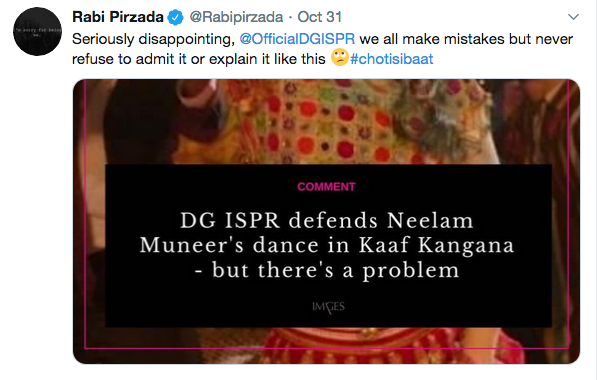 Shortly after her tweet, Pirzada's videos and photos were leaked online and went viral.

Meanwhile, Rabi filed a complaint with the Federal Investigation Agency (FIA) to take action against the persons who leaked her private videos and pictures on social media.

Rabi approached the cybercrime wing of the FIA to deal with the matter after private videos and pictures of the singer were leaked and anonymously shared on social media and WhatsApp earlier this week.

The FIA confirmed that it had received Rabi Pirzada's complaint. The law enforcement agency said has started an investigation into the case and that it would write a letter to Facebook on Monday, urging the social media website to disclose the details of the person who leaked the private videos on the social media platform.

Twitterati have showed their support to the actress and a special hashtag #westandwithrabipirzada was also created.

One user said: "Guys please avoid tweeting about or sharing Rabi Pirzada's video leak. It can have a negative effect on her..." 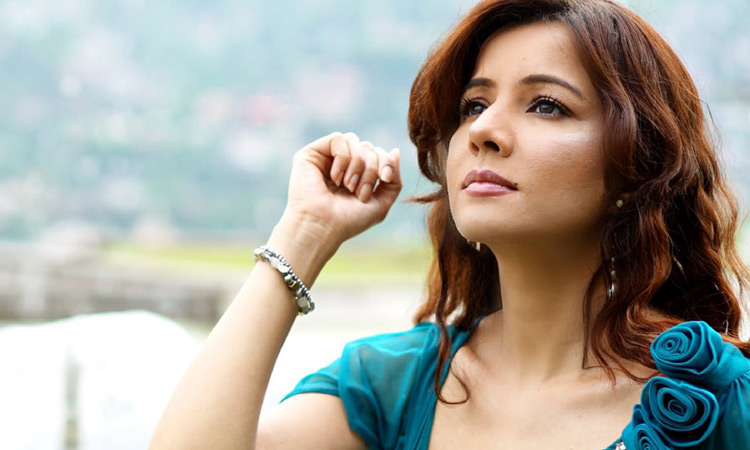 Another said: "We should not spread private things of anyone just for few RTs (retweets) and Likes."

Last month, Pirzada posted a photo on Twitter wearing what appeared to look like a suicide jacket and captioned: "ModiHitler I just wish huh. #kashmirkibeti."

Similarly in September, she again took to the micro-blooging site where she posted a video in which she was seen playing with reptiles that the actress said she would unleash them on Modi for abrogating the special status for Jammu and Kashmir.

She had also started content writing for news websites such as US News Box. She has also hosted a weekly television show. Her TV drama production Qissa kursi ka was launched in July 2016.[citation needed] She frequently makes guest appearances on Pakistani television comedy and talk shows such as on Dunya News's show Mazaaq Raat. In 2018, Peerzada made her film debut in the film Shor Sharaba in the lead role alongside Meera.

Peerzada has several projects in making, including director Shahzad Gujjar's romantic-comedy film Court Marriage, which was announced in late 2017.[6] She is also reported to star in a Hollywood production.[7]

In 2017, she gained spotlight after an interview in which she criticized Bollywood films and actor Salman Khan, blaming them for promoting crime amongst the youth.[8]

On 4 November 2019, she left the film industry due to her leaked private pictures and videos.[9][10] In 2019, she also threatened Indian Prime Minister Narendra Modi with suicide attack and attack from snakes.[11]

Rabi has been painting since she was eight years old.[17] She is a self-taught artist but comes to know about art specifics by a close friend and painter, J. Arif. She started with calligraphy and continues to do calligraphy of Quran in various forms, including calligraphing the complete scripture. Later, she started painted various objects as well as portraits. On a commercial side, she sells her paintings to support orphan children and needy people.[18]

Your search did not match any documents

I trembled all over, because I love this feeling. A hot round head rolled over my lips and I almost automatically waved my hips, wanting to feel it again. Sasha did not disappoint me: he made a few more long movements, caressing my petals with his penis, and only then put it to the entrance.

Olesya, that your beautiful leg knocked the sperm out of my balls. The girls laughed. To kiss Olesya's toes, I got on all fours in front of her. When I touched her fingers with my lips, they didn't hit me hard in the balls from behind. It was Marina's leg.