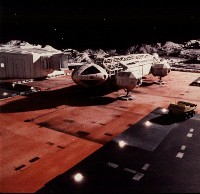 The Eagle is the iconic image of Space 1999. Brian Johnson's design is clearly influenced by 2001 A Space Odyssey; in turn, it influenced Star Wars and later science fiction (George Lucas visited the SFX studios during filming). Johnson says: "The moonbus in 2001, when Doug Trumbull and I were working on it, way back in '64, '65, I decided that it should look nicer if we had bits of plastic kit and girdering stuff all over it. 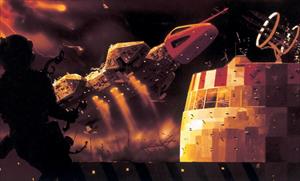 The Eagle was originally named the MTU (Multiple Transportation Unit), "a workhorse, a thoroughly utilitarian spacecraft." Here is an early Chris Foss version, based on Brian Johnson's design. Johnson told TV Sci-Fi Monthly in 1976 "The Eagle was based on a kind of grass-hopper shape which just sort of grew. It was considerably shorter before we started filming, but later it elongated." The Foss painting here shows the command module, leg pods and framework, but there is no discernible passenger module section.

These plans, labelled "Revised MTU 26 8 73" (26th August 1973) show the near-final form of the Eagle. The drawings show some evolution in the design- the introduction of the "M" pattern at the ends of the top spine, and the shape of the Eagle windows, the three vertical rocket engines under the passenger module. These rough plans were then turned into engineering designs by draughtsman Michael Lamont (later assistant art director on the Star Wars films and many James Bond films) and sent to Space Models, where the model was built in 3 different scales by company director "Wag" Evans, and model makers Gary Dickens, David Seymour and John Phillips. 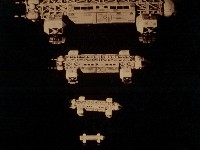 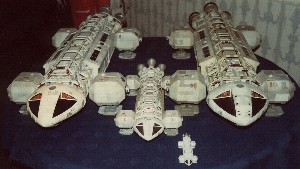 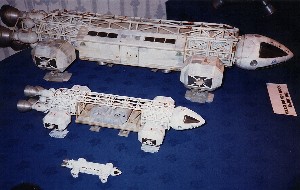 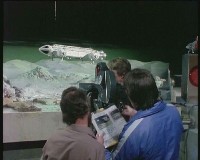 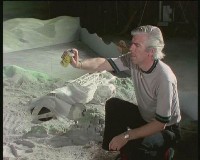 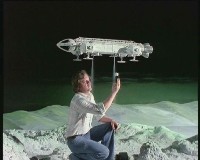 Filming the model (more photos). The rocket jets under the passenger module of the 44 inch models were functional. Freon gas canisters were built into the passenger module, and when the valve was opened, freon jetted out beneath the Eagle. To open the valve, an electric current was sent down the wires suspending the model. The Eagle was suspended by two wires, attached to each end of the top spine. Apart from the initial episodes, these two end bars have black insulating tape around them, to stop the wires shorting through the brass. 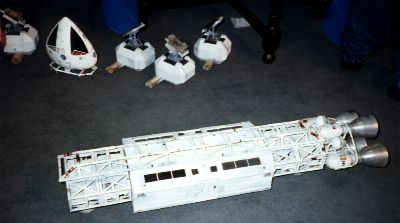 The command module and side leg pods can be disassembled; this was done for maintenance and occasionally for "damaged" Eagles. The framework is made up of 55 feet (16.7 metres) of quarter-inch brass tubing (steel in the third Eagle). 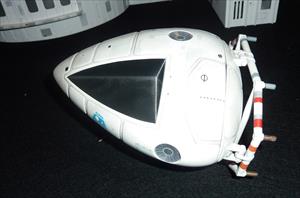 The Command Module detached. The outer frame ring from the main body is fixed to the command module, and simply slots in. There are two screws on the top, which hold the back of the cone (with the Revell Gemini astronauts) to the front. 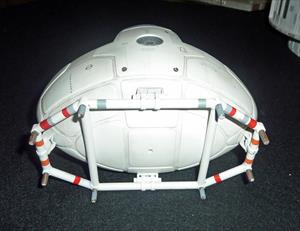 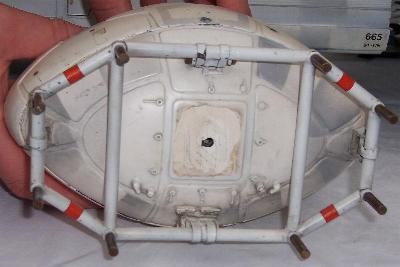 The rear door doesn't have any resemblance to the interior set door. There is slight detailing differences between Eagle 1 and 2 command modules, shown here. 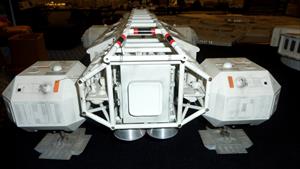 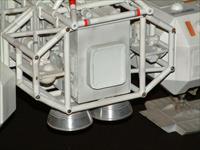 The main body. The Eagle command module "door" is merely a rectangle. 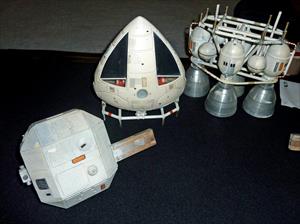 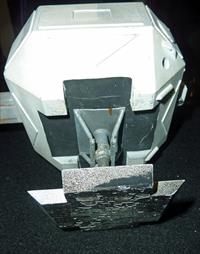 You can also view the Eagle laser turret in the small models gallery.

As a child of the 1970s, few sci-fi TV series had more impact on my young brain than "Space: 1999." the live-action British import from "Thunderbirds" creators Gerry and Sylvia Anderson.

The pre-"Star Wars" action adventure starred Martin Landau, Barbara Bain, and Barry Morse as members of Moonbase Alpha, who braved the perils of deep space after nuclear explosions ejected the moon from Earth orbit and sent it drifting into the galaxy. It ran for just two seasons (1975-1977) but made lasting impressions with its tense storytelling and amazing visual effects.

To recapture the magic of "Space: 1999," Eaglemoss Hero Collector is releasing the first in a series of collectible die-cast miniatures from this influential classic, starting with the memorable Eagle One transport. The England-based firm specializes in replica props, statuettes, miniature vehicles, and detailed spaceship models seen in pop culture franchises like "Alien," "Star Trek," "Battlestar Galactica," "James Bond," "Back to the Future," "Harry Potter," and "Ghostbusters."

"This new series of highly-detailed diecast models brings to life the many variations of the hero ship from the show: the Eagle One! Designed by Academy Award-winning SFX director Brian Johnson ("Alien," "Star Wars," "2001: A Space Odyssey"), this iconic shuttle was the crew's primary mode of transport.

"Almost 10" in length, each of the Eagle One models will be accompanied by a companion magazine packed with design info, interviews, and other details. The Eagle One had several alternate configurations on the show, that will see their time in the limelight in Hero Collector's new series — starting with its transport module, used for deploying crew to and from alien worlds. The classic Eagle One Transporter will be available first in July 2021, followed by more in the months to come!"

Related: Hot Wheels Perseverance lands in stores ahead of rover on Mars

"As someone who grew up watching "Space: 1999" and would come flying into the room when that groovy theme tune started up, it's a real pleasure to bring the iconic Eagle One Transporter to the show's many fans worldwide," Eaglemoss Hero Collector Brand Manager Chris Thompson tells Space.com.

"Not only will we be bringing other variations of this classic ship to life, but it marks our first foray into the rich worlds of Gerry and Sylvia Anderson, which occupied so much of my childhood. It's my hope that other people will enjoy these Eagles as much as we do, and that we'll have the opportunity to see other classic ships take flight over the months and years to come."

"Space: 1999" fans and collectors can learn pre-order details, including info on the next Eagle One configuration, at www.herocollector.com and www.eaglemoss.com.

Join our Space Forums to keep talking space on the latest missions, night sky and more! And if you have a news tip, correction or comment, let us know at: [email protected]

Coming soon to Hero Collector, a new series of collectable ships, based on the 1970s classic sci-fi series Space: 1999.

Space: 1999 followed the spacefaring fortunes of Moonbase Alpha, whose 311 personnel were left stranded when a massive nuclear explosion sent the Moon itself hurtling into deep space. This official die-cast collection presents highly-detailed scale models of the ships and vehicles seen on the show.

Space: 1999: the Official Collection Part 1 features the Eagle One Transporter.

Designed by Academy Award-winning SFX director Brian Johnson (Alien, Star Wars, 2001: A Space Odyssey), the Eagle One is the iconic hero ship of Space: 1999, and the primary transport for the crew of Moonbase Alpha. This modular vessel had many alternative configurations: it’s presented here with its transport module.

Powered by four fusion rockets, the Eagle One could reach speeds of 23,700 miles per second, and fly for up to 48 hours. This Transporter Eagle (or "Type A") could hold 8-12 passengers, plus the pilot and co-pilot, sacrificing space for scientific equipment or weaponry in favour of a passenger pod.

The 25cm die-cast model comes complete with a 16-page authorative magazine on the classic ship and series.

Fixed laser under the nose module.
Extendable turret in front of centre section.[N 1]

The Eagle Transporter is the main mode of transport for the inhabitants of Moonbase Alpha.

The Eagle (designed by Brian Johnson) is the primary form of transportation for the inhabitants of Moonbase Alpha. A multipurpose craft, it is divided into three basic sections; the command module, the service pod, and the superstructure. Capable of speeds up to 23,700 miles per second, or 15% of the speed of light, it is powered by four nuclear fusion rockets, and carries fuel reserves for 48 hours of flight. There are 5 main types of Eagle Transporter.

The Transporter Eagle, designated Type A, is fitted with the standard passenger pod and is capable of holding 8 passengers (up to 12 in an emergency), in addition to the pilot and co-pilot.[N 2] It is used for day to day transportation when special scientific equipment is not needed, and there is no anticipated danger.[4]

Looking very similar to the transporter pod Eagles, these are designated as Type C, and come equipped with various types of sensory devices for exploratory missions. They also contain a computer that can either be tied into Alpha's master computer or work independently.[1]

Identifiable by the bold red stripes on the pod, these Eagles are designated Type D, and have been adapted for field diagnosis and treatment of injury or disease that may be encountered on a planet's surface or in deep space. Manned by medical personnel, Rescue Eagles are equipped with mobile beds, patient-monitor units, and facilities for field surgery.[1]

Equipped with a cargo pod, the Freighter Eagle is designated Type B, and used for transporting supplies and equipment to exploration teams on a planet's surface, and for the return elements vital to Alpha's environmental and reprocessing systems. They can also be used as space-borne tankers for the refueling of Eagles with insufficient reserves for the trip back to Alpha.[1]

With a modified version of the passenger pod equipped to serve as a remote laboratory, this Eagle is designated Type E, and can be used to locate and refine crude minerals on the planets surface, eliminating the need to transport bulky raw ores back to Alpha. This pod also serves as a base for planetary-contact-and-survey teams. It can carry food and water and recycle air to support the team for several weeks.[1]

The Eagle can also accommodate one of several specialty modules, such as the winch platform used to disperse the nuclear waste canisters in Area 2. There is also an additional booster unit that can be added to the super-structure which can increase the range and power of the Eagle.

From the balls I move to the penis, I run the tip of my tongue around the head several times. Strong palms again fall on the back of my head, and the penis bursts into my mouth. Sosu, although it's more likely, they fuck me in my mouth.

oohh. how big he is. How I want to feel him in me, my mom passionately whispered.

Instead, we were instructed to sit down and watch. We sat on an old couch just a few feet from David. I could almost touch it. David piteously pleaded with his mother to send me and Petty away.