Jimi Hendrix, Seattle’s electric guitar god, is celebrated most strongly in the city in Paul Allen’s Experience Music Project at Seattle Center. Hendrix is more visible on Capitol Hill, where countless residents, shoppers and diners pass by his bronze statue everyday on a sidewalk in this eclectic neighborhood, in front of Blick Art Supply, at 1606 Broadway Ave.

I lived in Seattle when Hendrix exploded onto the world music scene (he was 9 years older than me). But, how shall I say this, I was not "experienced'' at the time, though I was aware of his music. I loved some of his songs ("Hey Joe" and "All Along the Watchtower", but didn't care so much for some of his free-form guitar as in "The Star Spangled Banner).

I learned to love his melody and words to the song, "Little Wing,"" which he wrote and was later performed by Eric Clapton's Derek and the Dominoes.

I remember of how I learned of Hendrix's death: the news came over an old ticker-type Associated Press news machine in the newsroom at the Daily Evergreen on the campus of Washington State University in Pullman, where I was a sophomore at the time.

Hendrix grew up in Seattle, attended Garfield High School, then burst onto the world music scene in the 1960s and showed British legend Clapton new ways to use a guitar. Hendrix died in 1970, at age 27, from an overdose of barbiturates. He is buried in Greenwood Cemetery in Renton, in the large memorial 100 yards south of the entrance; 350 Monroe Ave. E., jimihendrixmemorial.com.

Another pop icon gravesite in Seattle is Bruce Lee. This movie martial arts legend is a pilgrimage destination for visitors from around the word. The security guard at Lake View Memorial Cemetery, adjacent to Volunteer Park between downtown and Lake Washington, said flowers are piled as high as the headstone every year on Lee’s birthday.

Lee grew up in the neighborhood where he is buried, but made his fame in the Hong Kong kung fu film industry and American television. His son, Brandon, a budding movie star who died young, is buried beside him. Look for the graves behind the huge white heart stone that can be seen looking west from the cemetery entrance. The burial plot of the Dennys, a founding family of Seattle, is nearby; at 1554 15th Ave. East.; lakeviewcemeteryassociation.com.

I paid little attention to Lee's career (he was a Husky when I was a Cougar), so I have no personal recollection. However, I have never seen another non-military cemetery in the Northwest that is the equal to Lake View. It is a stunning place of honor, for those who rest there and for those who visit the graves out of respect.

For those of us that are old enough to remember that dreadful day of Jimi Hendrix’s death, we know the pain of losing a hero we thought would see many more decades of musical mastery and growth. The generation that came after Hendrix’s death and still heroized him is proof that the man had an unmatched influence on music. In honor of the guitar legend, it isn’t uncommon for fans to make the trip to Renton, Washington, to visit his grave site.

Here’s what you need to know about visiting his grave including expectations, location, and more.

The exact address of the cemetery where Hendrix’s body currently lies is 350 Monroe Avenue NE, Renton, Washington, USA, 98056. Greenwood Cemetery is it’s name and visitors might be surprised at how humble the cemetery is. Hendrix was buried in his family’s plot, right next to his mother’s grave.

For a long time people were dissatisfied with how plain looking the legend’s headstone and grave site was. It was simply a plot of land in a rather unimpressive cemetery with an equally unimpressive head stone. His father, Al Hendrix, was also unhappy with his son’s underwhelming grave site and so made a point to work towards building a real memorial for his son. However, his father was quite poor and couldn’t obtain the rights (and money) to his son’s music for many decades. He barely had enough funds to get his son’s body back to the states from London.

Building of the Memorial

When his father did finally obtain commercial rights to his son’s music in 1995, he was able to start drafting plans for a real memorial site for Jimi. The plans came to fruition in 2002 when a gazebo made completely of marble was erected in a different part of the cemetery. Jimi’s body was transferred from the pain headstone to under the gazebo as it was being built.

The memorial itself is a beautiful piece of architecture that fans applaud. Once you enter the cemetery, the memorial is just about 100 yards south. A marble dome held up by three elegant pillars, it is a site worthy of the greatest guitar player to ever live. Entering the monument, you will see some iconic lyrics etched into the marble along with a stunning portrait of the man himself.

His father had a major role in the memorial, attending to every detail. In an interview with Al, he said that Jimi didn’t just belong to him but the world. His father always wanted a proper memorial for his son to be built because he felt that he owed it to all of his son’s loyal fans.

The memorial now has thousands of visitors every year who come to get a photo, pay their respects, and sometimes even play a lick on their guitar in homage to Jimi.

Now when you get to visit the memorial, you not only get to see Jimi’s grave, but his extended family as well. The plot of land has graves going outward in a circle pattern from Jimi’s grave. Everyone from his father to mother to grandparents and cousins is buried right next to him–joining him in the afterlife.

When visiting the memorial, fans sometimes trample over the surrounding graves or leave it a wreck. Don’t be one of those people! Pay respect to the legend and his family and be mindful of your feet. Live flowers and objects that aren’t harmful to the environment are welcome. If you love history, the Renton History Museum is just down the street. 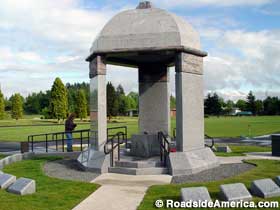 The music of rock guitarist Jimi Hendrix moved a generation, and pilgrims have trekked to the Seattle area to pay their respects for decades. Hendrix, the most famous resident of Greenwood Memorial Park and Cemetery in Renton, WA, had been resting under a simple tombstone since he'd died in 1970 (determined in the autopsy to have been the result of "inhalation of vomit due to barbiturate intoxication"). The rock star's remains were secretly moved to a new grave on November 26, 2002, the day before what would have been his 60th birthday. 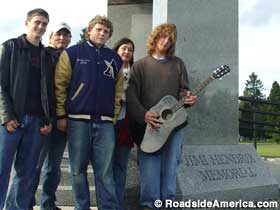 Family of Hendrix fans get the Memorial vibe.

The more elaborate half-million dollar monument was originally designed to feature a life-size bronze sculpture of Hendrix and a purple fountain, but those embellishments were nixed at some point. A stone block is sheltered by a 30-foot-high granite dome supported by three pearl-gray granite columns trimmed in "rainbow" marble. The memorial, where other family member are or will be interred, is on a circular drive in the southwest corner of the cemetery.

We pulled up to the monument after a brief rain squall, and an eerie sunbeam suddenly illuminated the deserted cemetery. After a few minutes, a teenager with shaggy hair and a guitar emerged from the distant woods and walked directly to the monument. He sat down and started playing a tune, and soon other of his family members showed up. The muse magnetism still works, even without a purple fountain.

This memorial is a primary attraction in any Seattle-area Jimi Tour, which also includes the bronze statue on Capitol Hill near downtown.

350 Monroe Ave. NE, Renton, WA
Directions:
In Greenwood Memorial Park. I-405 exit 4, loop south or north (depending on your traveling direction) onto NE 3rd St. East about a mile to Monroe Ave., turn right to the cemetery entrance.
Phone:
425-255-1511
RA Rates:
Worth a Detour

More on Grave of Jimi Hendrix

Polina got angry, And for how long did they, I wonder, blocked the street. - I can't say that. They will most likely run here, and then they will run to Suvorovskaya. As they carry the fire, they will start the movement. It looks like there are no detour options.

Into a defenseless, trusting, innocent Verbochka. into a laughing, kissing, tender Leska. into a hospitable, cozy, passionate Nelia. into a greedy, sucking, wet Yulia, an appetizing and inaccessible woman, a well-known artist in our city. who is fucked by guys behind garages in the evenings, and they end up in her mouth, on her breasts, on her dress, on her hair, and the most impudent.

Now she was lying under him with her skirt lifted up and her legs spread wide. Yes, this was not the young man whom Lera could kick off herself, it was a stocky man under 80 kg. He continued to fumble under the blouse, trying to unfasten the bra, then in his underpants, feeling for the overgrown mound, without ceasing to kiss her.