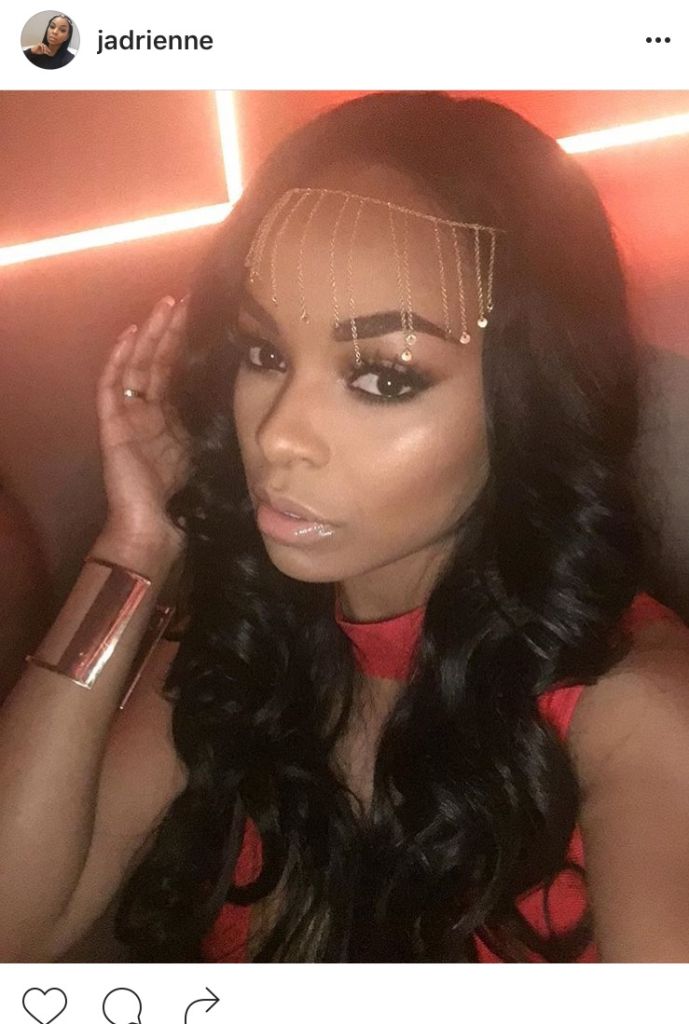 If you watched the season premiere of “Love & Hip Hop” then you met Felicia “Snoop” Pearson’s girlfriend J. Adrienne.

J. Adrienne is the Chicagoan who’s irritated by thirsty fans swarming her “The Wire” star boo, and she might look familiar if you watched two other VH1 shows.

Adrienne is actually “So Hood” from “Real Chance of Love”… 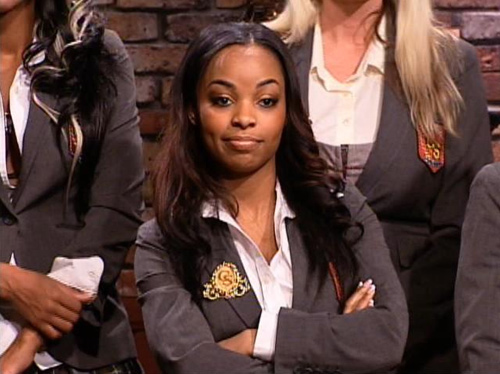 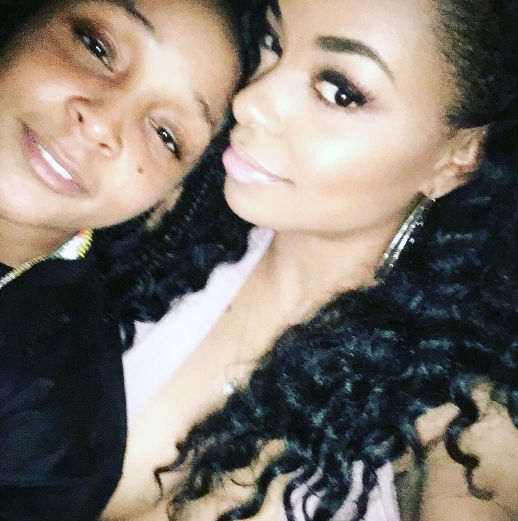 Meet the new “So Hood” on the flip.

Does Snoop’s girlfriend, J. Adrienne look familiar??? She should, because the newest #LHHNY cast member is So Hood from “Real Chance of Love” [PHOTO]

Throughout the night, “Love & Hip Hop” fans have taken to Twitter to say J. Adrienne looks familiar. However, many could not seem to place her, but they should, especially with VH1 being the network. Tonight was not J. Adrienne’s first time being on VH1.

Eight years ago, J. Adrienne was introduced to VH1 as So Hood on the popular series “Real Chance of Love.” Many people loved So Hood because she was sexy and spoke her mind, but Chance cut her because she was a little “too hood.” Tonight, a gossip page on Twitter put the pieces together of J. Adrienne being So Hood.

Snoop’s girlfriend, J. Adrienne is opinionated, bold, and not with the bulls–t and not much has changed since back in the day from what we see. This isn’t the first time this Love & Hip Hop newbie took her talents to reality TV. J was previously a contestant on VH1’s Real Chance of Love where she was immediately dubbed “So Hood” for her no-holds-barred attitude.

In this throwback interview on Atlantatainment with Debra Rocks, J speaks on her experience on the show.

Obviously she didn’t make it far on Real Chance of Love but she dusted herself off and headed straight to the third season of Charm School in an attempt to clean up her image. She and the Rock of Love girls found themselves clashing often. In this throwback clip, she had to “woosah” herself out of a fight because the other girls were effin’ with her name.
courtesy of MTV

She ended up quitting because, according to an interview with RealityTea.com she claimed, “Ricki [Lake, the then-host] does not get both sides of the story.” She even went on to call herself the modern Martin Luther King, Jr. because of her decision to remove herself from the show.

Luckily for her she was able to dabble in a little modeling(?) after her 15 mins.

Seems like J can’t catch a break in the love department, she still looks good though!

professional television watcher and a hopeless romantic living in Brooklyn; you see where my dilemma lies. IG: _iparker_

New Interview With So Hood From Charm School

So Hood aka Judith Scullark was the second girl to quit Charm School 3 this week. In this new interview with VH1, she talks about the reason she quit, plus why she doesn’t necessarily think Ki Ki’s elimination was racially motivated.

So Hood also continues to stand by her proclamation of being the “modern-day Martin Luther King.” Something tells me MLK would rather not be associated with this foolishness. She goes on to talk about a physical fight she had with Brittanya which wasn’t shown on TV.

Below are some excerpts from her interview, as well as more photos of So Hood.

What are your thoughts about this whole ordeal?

I thought it was a bunch of bulls***. It was a wreck from Day 1. I had a feeling when I first walked in the house that something like this was going to take place. I tried to stick it out and sure enough, come the second elimination, some bulls*** happened.

What was the problem?

Ricki does not get both sides of the story. She allowed people into her office: some she invited, some requested to go see her. Basically, snitches. I never ran to her to tell her what was going on, which I guess now I should have. But I followed by the street code: no snitching. I hate snitches. So a lot of people ran to her, and she never got Ki Ki’s side of the story. I had a weird feeling when I stepped off that bus and saw Ricki there, but I really wanted to change and I went through hell and high water to get to Charm School. Ricki’s trying to teach women to be charming, but that talk show she had was not a charming show. I have no problem with it. I love trash like that. I love all these crazy, who’s-the-father DNA-type shows. But how can she teach women to be charming?

The scenes of you screaming at Bubbles seem harsh.

Bubbles plays the victim role and a lot of people don’t know that. Lala pointed that out. Bubbles is very conniving, very sneaky. I’m starting to think she’s not as dumb as she comes off to be. I think she knows what she needs to do to get under people’s skin and then come off as the victim.

In the interviews shown around your departure, it seemed that you considered your leaving to be almost a political move.

Absolutely. I was told if you don’t stand for anything, you’ll fall for everything. You have to stand for something in life. I’m a fun girl, I’m a party girl. I like to take shots of whatever, but when the party’s over, and you’re trying to change…I gave up a lot of things to go to Charm School. My son went to live with his dad. I put a lot on the line. I really did make an attempt to change. I changed my outer appearance. I changed my inner appearance. I did all of that and I felt like I was in a race I couldn’t win with Ricki. She has no idea. I think people need to remember that if you’re in a situation and you feel like you don’t like it, get out of that situation. I wouldn’t have been comfortable being in that house knowing what happened, knowing that I could be on the chopping block for some he say/she say and that I wouldn’t be able to get my word across. ‘Cause if it got to that point? All f*** hell woulda went crazy. I probably would have lost my mind, so it was better that I removed myself from the situation completely. Like I said, I am the ‘09 version of Dr. Martin Luther King.

That’s quite a comparison.

I am! I know everybody’s laughing, but I feel like ‘09 is the year for change. That’s all our president talks about is change, change, change. And I’m following by that motto. I’m out here trying to put some ideas together to pitch. I think So Hood needs her version of Charm School. There’s a lot out here that I can teach. I get all these ideas from my fans. I live for them. So Hood belongs to the fans.

So instead of organizing marches, modern-day Martin pitches reality shows?

Yes! But it will still be fun and creative, but at the same time it will mean something. I love reality TV, but it’s getting boring. I want So Hood to put the real back in reality.

So, wait, are you still dancing?

What did you think of Marcia calling you “So Ho?”

I was offended because she talked to me the whole time. She asked me for advice, she wanted to get some hood in her, and yet, she couldn’t get my name right. That’s the most disrespectful thing you can do to a person when you have been smiling up in their face. She was drunk. Charm School is a joke for her. Send her to Celebrity Rehab.

Bay Bay Bay tweeted about a fight between you and Brittanya. Did you get into it with her before you left?

Oh yes I did! That unstable creature is fake from head to toe. She takes those tattoos and tries to cover up them stretch marks and imperfections on her body, but I see under all of that. Brittanya and I had an issue because she was saying if anybody ever f*** with her, she would spit on them. I don’t play that s***. If you’re looking to commit suicide, that’s the best way to do it, because I will f***ing kill you if you ever spit on me. I don’t know what barn her ass was raised in if she thinks spitting on someone is OK. She kept talking about she’s got this case, she’s got this case. Well, I wanted to know more about this case. It can’t be nothing major. She’s talking about out on bail. It’s probably a few hundred dollars. I mean, who’s not out on bail? I’m out on bail! We all out on bail! I’m out on bail, too, but it’s a minor charge. She wants to take something so minor and play like it’s so big. She’s playing this tough-guy role, and I told her, “If I ever leave out these doors, you better look out.” When I was leaving, after I said, “F*** Charm School,” she was the first person I saw, and I slapped the f*** out of her, and I threw a drink on Marcia. I wanted to show them how it felt to be treated like a garbage can. I gave them a taste of their own medicine, but I don’t spit on people. That’s horrible. That’s nasty. There’s f***in’ swine flu going around here and you’re spitting on people. So, I tried to slap those piercings out of her face.

You compare yourself to Martin Luther King Jr., but you understand that he preached nonviolence, right?

That moment I was Malcolm X! But all the rest of the time I was Martin Luther King. After I was at the club this weekend, I actually got into a fight. I’m talking to you with a black eye right now.

Was it worth it?

Yeah, it definitely was. I got my first black eye. It’s a weird feeling. I guess I officially got my street cred.

Two elderly women got out of the car. Approaching him, they began to look at him intently. He got used to it and calmly waited for how it would all end, he even became interested. - In my opinion, what you need. said the first.

I stripped down to my swimming trunks, but no one even paid attention to me. The doctor called me over to the table, examined me as usual, listened through a stethoscope, and wrote something down on my card. The nurse came up to me and quickly, but rather painfully, gave me an injection. The doctor told me: Your health is all right, but now, without dressing, go through that door on the right to take tests.

Three pairs of hands began to walk over my body again. I put my hands on Dima's shoulders, put my head on his chest and put out a little ass on which Oleg's hands were already lying. Vova pulled me by the ass from Dima and slightly apart my legs inserted his penis into my pussy, the penis hardly. Entered me there was a little dry, I asked to stop, took my cream from the table and carefully anointed my pussy and ass.

Then I understood the real effect of the cream, almost immediately it became warm and pleasant in the kitty, my kitty began to flow and.