A view of autumn colors.

The aspen leaves are bright yellow in the Colorado high country near Ward, Colorado, Friday, Sept. 23,

Moored boats are seen on Loch Faskally, as autumn leaves are reflected in the water, in Pitlochry, Scotland October 18,

A hiker takes in the fall colors as he makes his way along the Indian Ladder Trail on a warm fall day at John Boyd Thacher State Park, Tuesday, Oct. 18, , in Voorheesville, N.Y.

In this Tuesday, Oct. 4, photo, fall foliage colors a line of mountains in Chatham, N. H., as unsettled weather begins to clear.

A couple stop to talk beneath trees that are beginning to show their autumn colors in Royal Victoria Park on October 19, in Bath, England.

The sun shines on trees that are beginning to show their autumn colors in Prior Park on October 19, in Bath, England. After an unusually hot September and a mild autumn so far, trees in many parts of the U.K. are only just beginning to display their colors.

People walk under colorful autumn trees in Djurgaarden Park in Stockholm, on October 14,

Autumn’s colors peak on hardwood trees in a cemetery near the Congregational Church, Monday, Oct. 10, , in Cumberland, Maine.

Trees with autumn-colored leaves are seen near a school building in the town of Volozhin, Belarus, September 29,

Fall foliage is seen outside of the Reichstag, seat of the German federal parliament, the Bundestag, on October 19, in Berlin, Germany.

Autumn-colored leaves are pictured on September 30, in Potsdam.

A tree of changing colors stands on a meadow near Bernbeuren, southern Germany, on October 6,

A picture taken from a drone shows a man raking colorful autumn leaves on a meadow under a maple tree in Brandenburg, eastern Germany, on October 10,

A view of midtown New York City and the fall foliage in Central Park on November 3, The city has experienced very warm temperatures for this time of year, reaching into the 70s, which had delayed some of the most vibrant colors from appearing.

The November woods are bright and open now, with sunlight penetrating to the forest floor for the first time since spring. The remaining leaves are golden brown, and filtered through them, the sunlight still takes on a warm feel. The days are getting shorter, though, and the winds are carrying more bite. Soon, the snows that have already made a few brief appearances will become a more lasting, seemingly permanent sight.

Although fall is a brief season in New England, it&#;s packed with intense beauty and time-honored traditions that makes it universally loved — that is, until the cleanup begins. Acorns are like a million ball bearings under the fallen foliage, all waiting to be carted to compost on the next warm day. Tourism has wound down, leaving resort towns empty and waiting for ski season. And today, scanning the radio dials, I heard holiday music.

As we send out our final foliage report for the season, there are still some opportunities to see the autumn colors around New England. Tamaracks and beeches are providing punctuations of color in the northern forests, while the late maples join the oaks that are only now reaching peak in the southern portions or our region. There will even be some isolated late peak color reached on Boston Common and the Long Island Sound this weekend, giving at least one more opportunity to enjoy the best of autumn.

And what an autumn it was!

The fall colors came on strong across northern New England as a dominance of sunny days and cool nights provided an ideal setup for bright foliage. The forests transformed into a canopy of intense red hues on a scale that hadn’t been seen years, and locals and visitors from all over the world were left awestruck.

The foliage this year in northern New England was beautiful!

Unfortunately, as the wave of peak moved south, a string of October storms stripped much of the early color, and cloudy weather combined with the severe drought in southern New England left those areas with a more muted show. It was still beautiful, though. Truly, the foliage show in New England rarely disappoints.

And now, as with the forests around us, this blog drifts into dormancy. We thank you for following along this year from our first forecasts, and for sharing in this beautiful season with us. A special thank you to all the contributors to our foliage map, and especially to the photographers who contributed their amazing images to this report each week.

We’ll see you next August! 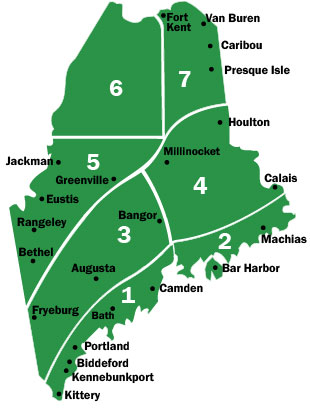 Maine's Department of Agriculture, Conservation and Forestry releases weekly foliage reports each year during foliage season (mid-September through mid-October). Forest Rangers assess the amount of color change and leaf drop when they are on assignment in the field. These reports represent the official word on foliage conditions in the state of Maine and are provided to the public and media.

* Represent peak conditions from north to south in zones 3,4 and 5 (north being the earlier date).
**Peak season occurred after last foliage report for season was released.

Travel + Leisure ranks Rangeley as one of the best places in Maine for fall foliage.