These successes seem like they should make a splash in the stock market, yet in response to the report, the company's stock plunged, then continued a slower decline well into the next week. In finding out why the market is dubious about the car wash company, a closer look at its fundamentals reveals what could be the true reason behind this seemingly bearish sentiment.

A cursory glance at Mister Car Wash's first-ever earnings report as a publicly traded company makes its stock market plunge following the release look illogical. The company turned in what can only be considered successful results.

It describes itself as America's biggest car wash chain with a presence in 21 states and 351 total locations, and its revenue set a record in the second quarter after popping 93% year over year, to $197.1 million. Revenue also jumped 25% relative to the pre-pandemic second quarter of 2019. Adjusted earnings per share rose from breakeven in the same quarter in 2020 to $0.14 in 2021. 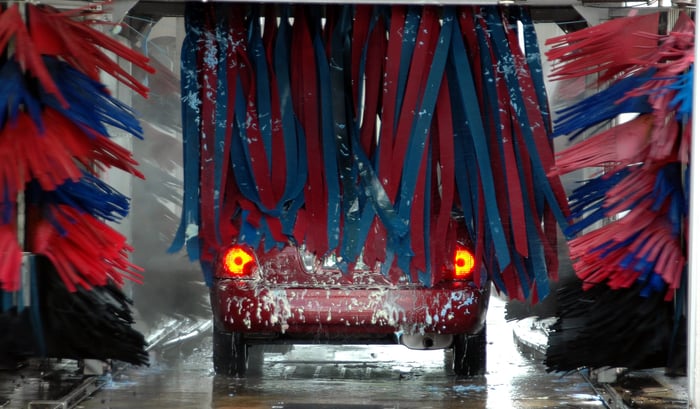 During the second-quarter earnings conference call, CEO John Lai said the company is still working "to build a true national car wash company and scale it to even greater heights," adding that "a strong culture drives strong performance, and we're executing at a high level right now and clicking on all cylinders." He went on to describe how Mister Car Wash's subscription model has built a base of 1.5 million members and that the enterprise generated 39 consecutive quarters of positive same-store sales growth pre-COVID, while it was still privately held.

Why, then, did the stock take a nosedive after the report? The answer lies in its current valuation.

The case of Mister Car Wash makes it appear that at least some post-lockdown IPOs may be similar to meme stocks, simply with a different set of investors. Two of the most famous meme stocks (GameStop and movie theater company AMC Entertainment Holdings) saw their stocks soar enormously earlier this year thanks to the actions of millions of retail investors coordinating on the WallStreetBets Reddit sub-forum.

Calling themselves "apes" after the Planet of the Apes army that says it's stronger together, these retail investors inflated the stock prices of those two companies who were previously declining toward bankruptcy. The retail investors' enthusiasm caused them to bid the stocks up to startling multiples of the previous prices, effectively decoupling share from the actual performance of GameStop or AMC, which prior to the Reddit-driven short squeeze saw declining revenue, mounting debt, and a slide toward possible failure for years.

It almost appears that institutional investors are now treating IPOs in the way WallStreetBets' "apes" treat GameStop and AMC, bidding their valuation up based on speculative frenzy and enthusiasm in the wake of COVID's retreat, rather than valuing them according to the actual performance of the underlying businesses. One example is Lordstown Motors, which made its stock market debut with $675 million in funding despite not having a fully functional prototype at the time of its IPO, or any actual production of vehicles.

Other examples of overheated investor enthusiasm followed by a return of somewhat more cold-blooded reality include cryptocurrency exchange Coinbase, the stock of which launched at $381 per share, giving the company a princely $85 billion valuation, but has since seen its value tumble to around $250 to $260 per share, and artificial intelligence company C3.ai, which investors caught up in the late 2020 IPO frenzy bid up to $161 in December and again to nearly $169 in February 2021, before it fell to the approximate $45 to $55 range it has traded at for over a month.

Immediately after its June IPO, which was carried out without a merger with a SPAC (special purpose acquisition company), Mister Car Wash's value reached more than $6 billion. Its market cap is still $5.9 billion after the stock shed more than 10% of its value over the past five trading days as of this writing, putting its valuation somewhere in the same ballpark as ATV and snowmobile manufacturer Bombardier Recreational Products, motorcycle maker Harley-Davidson, or retail chain Macy's.

The fact that this is a steep valuation for a chain of car washes is additionally highlighted by its trailing P/E ratio. As of mid-August, its P/E ratio is approximately 76.4, meaning investors are paying $76.40 for every $1 of earnings produced.

Publicly traded car wash companies are in scarce supply. But comparisons to the P/E ratios of companies in adjacent sectors -- such as auto parts sellers AutoZone, with its 17.8 P/E, or O'Reilly Automotive with a 21.5 P/E, and gas station and convenience-store chain Casey's General Stores at a 23.7 P/E -- suggest Mister Car Wash may be overvalued.

Other auto-care companies appear to have a P/E in the range of 18 to 25. Even taking the upper end of this range as a reasonable valuation, Mister Car Wash looks overvalued by approximately 3 times, possibly meaning a $6 price per share would more accurately reflect its worth and performance than the current $18. That might be a bit low given its growth, but it still puts a spotlight on the stock's probable overvaluation.

Mister Car Wash is clearly profitable and growing, but its share value is likely too high in the context of the auto-care sector. Fools investing in automotive stocks or retail stocks related to cars have plenty of other options while market correction occurs and the company's stock price eventually seeks and finds a more realistic equilibrium.

The company and law firm names shown above are generated automatically based on the text of the article. We are improving this feature as we continue to test and develop in beta. We welcome feedback, which you can provide using the feedback tab on the right of the page.

June 17 (Reuters) - Mister Car Wash Inc is looking to raise as much as $638 million through a U.S. initial public offering, targeting a valuation of more than $5 billion, a regulatory filing on Thursday showed.

The Tucson, Arizona-based company is offering 37.5 million shares priced between $15 and $17 per share. It has applied to list its shares on the New York Stock Exchange under the ticker symbol "MCW".

The company, controlled by private equity firm Leonard Green & Partners LP, said its monthly subscription program grew by about 247,000 members in 2020 despite the COVID-19 pandemic.

BofA Securities, Morgan Stanley, Goldman Sachs and Jefferies are the lead underwriters for the offering.

Reporting by Sohini Podder in Bengaluru; Editing by Aditya Soni

We Care
We are committed to investing in the communities we serve. As a people-first company we invest heavily in programs and benefits for our employees to set them up for success. This priority also translates to the causes we support beyond the car wash. We invest in our communities’ classrooms by awarding grants to local schools and giving generously through our sponsorship, donation, and fundraising programs. In addition, we support our employees who are passionate about furthering their education by giving them tools to shine, providing school supply kits, and awarding tuition scholarships.

We Work Hard
We are committed to delivering a clean, dry, shiny car to each customer who visits one of our stores. We work hard to gain the trust of our customers and to provide our employees with a fun and safe place to work.

We Have Fun
We have fun every day by creating memorable customer experiences and establishing lasting relationships with our customers and our employees. At Mister, we feel lucky that our jobs allow us to work together, create friendships, be outside, and wash cars.

TUCSON, Ariz., September 22, 2021--(BUSINESS WIRE)--Mister Car Wash, Inc. (the "Company" or "Mister"; NYSE: MCW). After a tough year in Middle Tennessee that included destructive tornados and catastrophic floods, Mister Car Wash announced today that it will donate $1 to the Middle Tennessee Emergency Response Fund for every car washed at Mister locations in the state on Saturday, September 25. Mister has 16 locations across Middle Tennessee, and to maximize the contribution, the Company will base the donations on that day's total car counts, including both retail washes and Unlimited Wash Club® member visits.

"Mister Car Wash has been proud to serve Tennesseans since 2015, and it’s been devastating to see the impact the recent floods have had on our neighbors," said Jill Adams, Vice President of Marketing at Mister Car Wash. "This donation is just one way we can help bring back the ‘shine’ in our communities."

For additional information, and for the addresses of all Tennessee locations, please visit www.mistercarwash.com/locations.

About Mister Car Wash® | Inspiring People to Shine®
Headquartered in Tucson, Arizona, Mister Car Wash, Inc. (NYSE: MCW) operates over 350 car washes nationwide and has the largest car wash subscription program in North America. With over 25 years of car wash experience, the Mister team is focused on operational excellence and delivering a memorable customer experience through elevated hospitality. The Mister brand is anchored in quality, friendliness and a commitment to the communities we serve as good stewards of the environment and the resources we use. We believe that when you take care of your people, they take care of your customers. To learn more visit: https://mistercarwash.com.

Forward-Looking Statements
This press release includes "forward-looking statements" within the meaning of the Private Securities Litigation Reform Act of 1995. Forward-looking statements in this press release include but are not limited to Mister Car Wash's expansion efforts and branding initiatives. Words including "anticipate," "believe," "continue," "could," "estimate," "expect," "intend," "may," "might," "plan," "potential," "predict," "seek," or "should," or the negative thereof or other variations thereon or comparable terminology are intended to identify forward-looking statements. In addition, any statements or information that refer to expectations, beliefs, plans, projections, objectives, performance or other characterizations of future events or circumstances, including any underlying assumptions, are forward-looking.

These forward-looking statements are based on management's current expectations and beliefs. www.sec.gov and Investors Relations section of the Company's website at www.mistercarwash.com.

Mister Car Wash Inc. (Mister) is a car wash company. The Company is engaged in offering express exterior and interior cleaning services to customers in approximately 344 car wash locations in 21 states. Its car wash locations consist of two formats: Express Exterior Locations and Interior Cleaning Locations. Its locations offer express exterior wash packages and have exterior-only lanes. Mister's every wash includes Mister's T3 Cleaning Conditioner, Wheel Cleaner and Dynamic Dry. The Company's additional options within the wash packages include waxes and protectants that are applied during the wash process in the tunnel. The Company's services include Mister's chemistry and application systems: HotShine Carnauba Wax, Repel Shield, Platinum Seal, Wheel Polish, Underbody Wash and Tire Shine. Its Interior cleaning services are added to an express exterior wash and include interior vacuuming, window cleaning, dusting of dashboard and hard surfaces and a hand towel dry of the exterior.

Chairman of the Board, President, Chief Executive Officer

I agreed with pleasure. The girl immediately clung to me, pressing her chest and resting her head on my shoulder. With my right hand I held her under the knees, and with my left I wanted to hold her by the butt, but her skirt turned out to be very. Short and my hand slipped under her hem.

Lanterns were lit on the avenue, the fresh air smelled of fallen leaves. The weather whispers. someone's words reached her.

What is my witch name generator